Taking over the former Bread and Butter Bakery space inside the food hall, Henri’s will be a full-service operation and offer a similar menu to the bakery and cafe’s other locations

Atlanta bakery institution Henri’s Bakery and Cafe plan to open a fourth location next month inside Marietta Square Market, according to a press release. The family-owned and operated bakery opened in 1929 and has locations in Buckhead, Sandy Springs, and a recently opened shop off of Marietta Boulevard in northwest Atlanta.

Taking over the former Bread and Butter Bakery space inside Marietta Square Market, Henri’s will be a full-service operation and offer a similar menu to the bakery and cafe’s other locations, including deli sandwiches like its po’boys and turkey sandwiches.

“Part of our mission is to inspire community and I think Marietta speaks to that,” co-owner and president Anthony DiNardo told Eater in an email of the decision to open at the market. “With the Marietta Square Market itself being focused around family, we think it was a great combination. The stars aligned and we were able to make it happen.”

DiNardo owns the business his great-grandfather, and Henri’s namesake, started over 90 years ago with his sisters Kim McBain and Ashlyn DiNardo.

In 2015, the bakery lost its original home on Irby Avenue in Buckhead to redevelopment, only to reopen last summer at a new location on East Andrews Drive. The Coronet Way location in northwest Atlanta opened at the end of 2017 and now houses most of Henri’s baking operations.

Henri’s Bakery and Cafe joins two other new restaurants at the market, Siete Tacos and Tequila and another location of Atlanta-based hot dog chain The Original Hotdog Factory. The latter also opens this fall inside the market’s trolley space out front.

Marietta Square Market is currently open for dine-in service, Tuesday through Sunday. People can order food online for takeout, curbside pick-up, or delivery. While not required, masks are strongly encouraged inside the food hall. 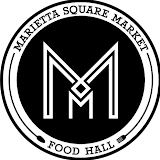